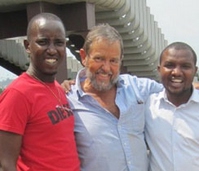 Carl Johnson is a Clinical Psychologist, a Diplomate of the American Board of Professional Psychology. He says: “Only God can really heal anybody but He can use us to do some of the work.”

Dr. Johnson has volunteered his services in some of the most devastated places on earth. He has included TFT – Thought Field Therapy – in his treatment of large numbers of traumatized tortured ethnic Albanians in Kosovo, South African Zulus degraded and otherwise victimized by apartheid, and orphaned genocide survivors in Rwanda. Just three people were unable to report full satisfaction following treatment. Two year followup, which was possible with 75% of them, revealed no instance of relapse.

The extent of healing, the dramatic turnaround in the natures of the people treated, astonished Dr. Johnson. He had expected good results ” but nothing like this “. He tells of an early Kosovo patient : “The man waited for treatment outside the bombed medical office of Mustafe Shala, the village physician in western Kosovo who had become my close friend, leading me everywhere to find and heal patients together.

The patient sat outside in the waiting area, alone at one end of a field of log “benches”; his family and the other villagers there for help sat at the far opposite end. They shuddered with fear of that man and were relieved that he was the first to be taken in for treatment. When he and I were about 12 inches apart I had to say a little prayer on it because that man, with the tight shape of his face, was the scariest guy I had ever seen.

At the conclusion of treatment, the patient did an abrupt about face, exited the room, and sped off in his vehicle, only to return in 10 minutes bearing bags of fruit and nuts from the trees at his home, as gifts for us. He thanked and hugged us. He was happy and calm and his face had become the face of a gentle person. He remained to comfort and escort his wife and the others into treatment, and he offered to take us to reclusive trauma victims hiding in the Albanian Alps.”

Dr. Johnson says a dream was given by the many courageous people who gave permission for him to try his best to help them, that they are good people, each with a peaceful heart that had been hidden by a tortured mind. If enough of the rest of the world’s population could only be helped to return to their own peaceful hearts, there would be peace on earth.

But God would need many healers. Dr. Johnson dreamed of the emergence of a corps group of leaders who would be able to develop a Coalition for the Peaceful Heart, expanding and carrying their capabilities to people in many lands. After his second trip to Rwanda, Dr. Johnson received a letter from Swedish activist Gunilla Hamne. They would work extensively together in Rwanda. By recording the various treatment sequences required for full relief of the Rwandans PTSD, it was possible to construct a treatment algorithm that is now having success in other African countries.

Dr. Johnson says “I am so gratified by the untiring work being done at this time by Gunilla Hamne, together with Robert Ntabwoba, Jacques Sezikeye and the other angels of mercy of the burgeoning Peaceful Heart Network. These people are healing and teaching our treatment method to such large numbers of people who desperately need them. I thank God for these servants. They are the life that gives realistic expectation to the dream of love and peace among all peoples of the world.”