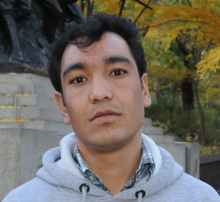 After three decades of civil war in Afghanistan, war victims and ordinary people are facing many kinds of difficulties and problematic situation, as well as they are ignored by Afghan authority completely.

So these kinds of behavior, lack of justices, and negotiation with Taliban secretly, caused the ordinary people become more disappointed and pessimistic to the Government of Afghanistan and peace process.

The AHRDO teems from many deferent international organizations came to gather for the purpose of establishing a new real participatory, nonprofit and non-hierarchical organization in 2009. For creating a safe atmosphere for dialog by arts, and giving opportunity for those who have a unique and creative ideas to share, unfortunately these opportunity were not only taken from them, but they were ignored completely in the society. We believe that the participatory theatre methodology which was found by Augusto Boal in the Brazil and transferred to Afghanistan by Mr. Hjalmar then were Afghanized by AHRDO Teem, is the best methodology for encouraging and involving the ordinary people to take part in
finding the crises and solve by own selves actively.

Right now we are using three methodologies in Afghanistan:

• Theatre of the Oppressed (TO) for the empowerment of war victims, widows and ordinary people.

We facilitate 6 full days TO training workshop, that generally every workshop and specifically every day should have start, middle and end.

In the event we play many kinds of Games and exercise, such as introduction, Warm up, trust building, improvisational Games, Image theatre and after every two games we do discussion among the group to share their ideas, interpret the images and tell there unshared histories.

Whenever after telling their tragedian history the trainee feel impacted, we do the TTT for refreshing and therapy. At the end of workshop, we ask the participant to make a play best on the history of all groups, just we support them artistically, after that we organize a bigger event, perform to others and ask them to find the solution and take practical part for solving the solutions on the stage.

• Playback Theatre (PT) which was found by Jonathan Fox in NY and transferred by Mr. Hjalmar to Afghanistan

We use this methodology for therapy and documentation. We facilitate a half day performance that ask the widows and war victims, to share us their histories, then to respect and empathize them, we turn it to art and perform back to them as a small gift.

• Memory Box, which was combined with the aesthetic of the oppressed by Mr. Hjalmar.

Usually we organize four full days training workshop for war victims. In the workshop we facilitate introduction, improvisational and trust building games and exercise that everyone can trust and share their painful history to the group. Later they bring from five to ten instruments which are connected to their personal lives. At the end of the workshop the out pot would be exhibited to other group by everyone as festival.