The road to Bugasera prison in Rwanda.

Had a training at a prison in north of Rwanda the other day. 70 prisoners gathered in the low brick house named “Cantine” a place where you can buy soda and bread on the visiting days when relatives and friends – hopefully – come. Not everyone gets visits. Some have been rejected.

The cantine is inside the big entrance, but outside the big gate in the wall surrounding the actual detention buildings. A place in between freedom and seclusion.

The prisoners were already sitting waiting on the wooden benches when we came. Happily greetings us welcome back again. Ready with writing pads and pens and the instruction we had printed for them the first time. All dressed in their pink and orange uniforms: short sleeved shirts and kind of long shorts. Pink for those who have their verdict. Orange for those who are still waiting for their final judgement.

It was not the first time Murigo and I came here. For me the second time. For her the third. We have been doing trainings in all except one prison in Rwanda. That makes 13. More or less 3000 inmates in each prison. To some we have been coming back several times. Like Bugasera. In each prison the best educated have been chosen to participate in the workshops: teachers, medical doctors, pastors, priests etc.

They asked Murigo to tell her story again. It is fascinating to see their interest in her story of surviving the genocide and moving from hatred and vengeance to commitment and compassion for everyone, also for the prisoners, they who are the reason for her being an orphan. It is an open dialogue about their crimes and her situation that is difficult to imagine possible for many. Here it is.

When we have showed one of the videos with the TTT song performed by Mibirizi, a famous Rwandan singer, one of the participants says: “I am a musician too, I will also write a song about TTT!”

“Wow! That would be great” I respond.

Afterwards the prison Director asked us to come to the office. We sat down in the big black leather sofas. Her secretary offered us water. She was busy behind her desk.

After a while the Director joined us and commented:

“From what I have seen this technique is very helpful for our inmates. And I have to admit – also for myself. Could you do it with all the prisoners next time? That would be very good!” They are 3 000. “

I could only answer one thing: “Of course, we will do our best.” At the same time thinking how to make it possible teaching so many at one time. The date was decided.

Murigo and I prepared us with videos, projector and some orange cloth to make visible those inmates who already knew the technique so that the others would be able to see whom to look for.

We came on motorcycle taxi. The road is rough the last part, meandering through the fields and bushes. So when getting off the motorbike the backpack had obviously bounced open and all the stuff fell down to the ground. The laptop took the ground hard and didn´t wake up again. “Alas – no video. We will have to do something else…” We are allowed to pass the first gate after leaving telephones and id-cards to the guards in the boot. We get escorted by Jean Baptiste, the social secretary.

“They are all waiting for you”, he says smiling. “We are all looking forward to this.”

Some of the prisoners are working outside the wall sewing uniforms. They wave to us smiling them too. The orange and pink prison fabric shines. Others are on their way to work in the fields, carrying the hoes over the shoulder.

We walk along the wall, a monument of red brick, giving an impression of a fort.

The director welcomes us in her office while the social secretary hands over impeccably handwritten program for the visit, given in eleven points. One program in English for me and one in Kinyarwanda for Murigo. When reading it we realize that we are now the guests, and not responsible for the content of the program. The prisoners have prepared to the program to the last detail. We have just to follow and fill the points named “6. The history of TTT” and “8. Murigos testimony”. This means no laptop needed… What comes next was one of the absolute highlights of this TTT work.

We are escorted in through the high dark brown gate. On the inside there is a lot of activity going on, inmates on their way out with barrels to get water down in the lake, others carrying planks and iron sheets, mixing cement for a new building, cooking in huge pots in a tent (originally white but darkened in black by the charcoal smoke) placed in the middle of the yard. But the spot that soon brings our eyes attention is a podium with a table decorated in white cloth and an arrangement of red textile roses. In front of the podium sits “our” 70 students from last time on the low benches. They are all dressed in their well-ironed orange and pink uniforms. The rest – several hundreds sitting on benches and others standing around are all in ordinary clothes – in a scale of blackish brown. The pink and orange stand out.

We are welcomed by one of the “chief” prisoners, responsible for the TTT activities. He directs me to one of the white plastic chairs behind the table and introduces Bernard, who is appointed to be my interpreter. Murigo is there beside, the social secretary and a bit later the Director.

The program starts. More and more people gather around. Somewhere around a thousand inmates and staff. I introduce myself with my poor Kinyarwanda. “Ndishimye cyane kubaboba..” I’m happy to see you…” Already after that first sentence everybody laughs and gives me applauds. An easy way to connect and get appreciation.

The “Master of Ceremony”, inmate Mr Francis (I think he is a Pastor) takes over:

“We are grateful to have learnt this technique from Mme Gunilla and Murigo… it has helped us a lot to remember our happiness again.. We want to show our appreciation by singing some songs that our fellow musicians here at Bugasera prison have composed.”

They have two guitars, one electric base and one Inanga, a traditional string instrument similar to a lyre. The sound system is well arranged with three microphones and a mixer board. The oldest of the inmates start. How old? Quite some age since the genocide was staged 21 years ago and they were obviously old already by then. They call them Mzee – the wise old ones. They have their cow canes in their hands, wagging to and fro (seems to be no worries that anybody will start a riot. The cow sticks are in heavy wood, easy to beat and hurt someone severely).

“When you use the fingertips to heal your trauma,

you realize it was long time ago,

that you felt that happiness for dancing,

you start remembering your childhood. 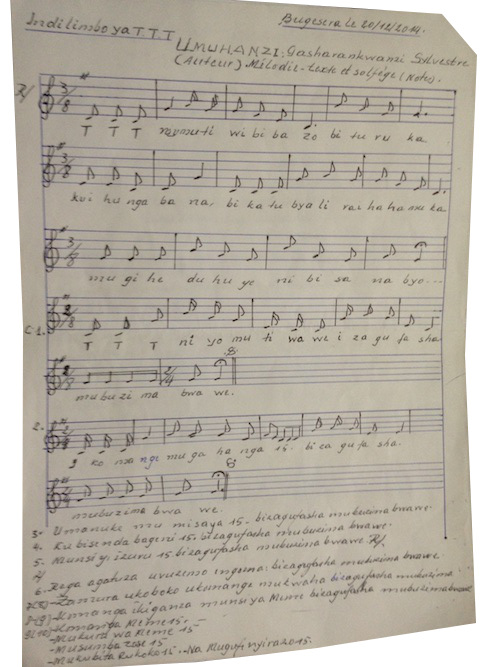 Everybody hails and clap their hands. More people join around the stage, curious about the show.

Another song is performed. I get the notes: it is written as if by a computer, but it is done by hand by one of the inmates who obviously have written notes many, many times.

Feel your body, shake your body

Even though you cry, don´t despair

TTT is your chance to laugh with the world again

For those traumatized by genocide, war crimes and rapes,

endangered by loneliness and heart broken

casualties, orphans and who ever all over the world

TTT brings to you the new alluring smile

For making you feel all right,

until you reach your seventh heaven

Then it is mine and Murigo´s turn to perform. The already TTT trained prisoners spread among all the others, showing the gestures with deep seriousness. I find a bench to stand on so that also those further back can see. I tell some stories and how impressed I am by their program and the songs. More laughter.

More songs. More tapping. More laughter. We do Do-In self massage. It becomes like a dance and the peak is reached. It is crazy and we all laugh while swinging the knees round, round, stepping on the toes, the heels, the outside of the feet and inside. It looks even sillier than TTT. Still it seems they cannot resist joining.

I think: Imagine that these people, in prison many of them for 20 years, some to stay there many years to come – tat they can feel relief from TTT. Then imagine what may be possible.

The Director closes the ceremony by comparing the TTT with the feeling of having had a full meal and milk “You feel calm and satisfied.” I do my best to express to all those inmates present how amazed I am by what we have been given: Mukakoze cyane! We really want to spread you songs to others. Your words and songs can help many to find peace inside”. Like a one-voice choir they exclaim: “Yego!” Yes!

We leave the stage greeting one after the other with handshakes and palm-to-palm claps. Smiles of confirmation. On the way out through the main gate I ask the Director if we could record their songs.

“I can´t say, but try to talk to the General Commissioner, as you know the rules are very strict.

We did get permission. One week later we came back Murigo and myself. We had to wait for quite some time outside the prison wall while the Director had to confirm again with the Head quarters that we really were allowed to take video of the prisoners singing. Nobody wants to risk doing something the superiors are not approving.

We sit waiting chatting in the shadow under the roofed peyote. Rows of prisoners pass in their working uniforms. Some of them greet us with a recognizing smile, doing some TTT-gestures with the hands. Others pass hardly noticing our presence.

The General Commissioner is finally available and gives clear signal to go ahead recording the songs. Yes!

We see the first group coming out of the gate. All dressed up in their “official” well-ironed uniforms. They start singing already when marching towards us. The inmate electrician is connecting the loud speakers by twining two loose cables together.

The inmates gather under the roof with us and start singing: “TTT – yewe – TTT …” Some of them dance in the traditional way with arms in the air and the largest possible smile in the face. They do two songs before the next group appears. It is hilarious

We applaud – also Director join us seeming somewhat astound him too – and praise their creative initiative and their ability to feel change in spite of their condition.

“Your songs can help many to understand the possibility to heal. Bravo!” I say and shake their hands as many as I can.

A heart can find peace also behind a closed gate.