Every now and then we get news from our TTT colleagues and in the world, and from people who want to learn and spread waves of healing.

Our goal is to build a strong group of certified Trauma Tappers worldwide who can multiply the technique.

Here is a email from Maketh Kuot Deng in South Sudan. He was one of the participants in the Trauma Tapping workshop for  Peace Mobilizers in the capital Juba last year (see blog TTT pioneers of South Sudan)  He has since been spreading TTT, even during the violent conflict that started in December 2013 and spread to large parts of the country until a peace agreement was signed in May 2014.

“This is to let you know that me and the others are playing an important role in counseling the people who are very traumatized and have lost hope in their lives.

Like this young man in the photo who is a cattle herder who used to have a lot of cattle.  This can be seen by his brown colored hair which is a sign of his cultural identity: A Dinka who is very rich in cows,

But during a raid by another tribe all his cattle was stolen and his senior parents left dead. Cattle raiding is a huge problem in South Sudan. The young man spent many days without eating, just sustaining his life by drinking water and talking to nobody.

When I met him he told me his condition. He said: “The only thought that keeps coming to my mind is to commit suicide to avoid this world of suffering. We talked and when I told him about my own experiences with the tapping he accepted to try. 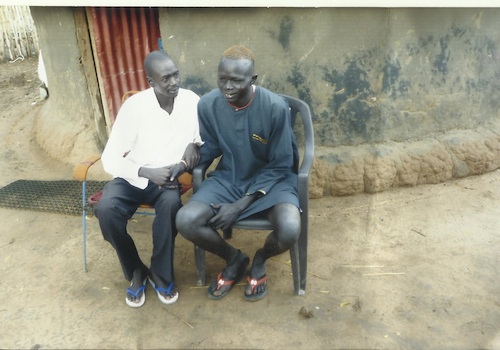 When I had finished  he looked at me and said he felt that the tapping had really changed his state of mind and had made it able for him to relax. In the picture you can see that his eyes are open, and you see a faint smile on his face. He is shaking hands with me as a sign of saying he was much better after the treatment. All thanks to the TTT.

Some weeks later another message came from Maketh:

“I met a man who was in Bor in Jonglei state with his family, when shooting and fighting started. He and his wife with their little baby had to run and hide in the bush near the bank of the river Nile.

The following morning  the fighting came closer  and all those who had been hiding by the riverbank  tried to cross the Nile to get to the other, hopefully safer, side. There were not enough boats to take people across, so it became a competition of life and death to get on board. This man´s wife managed to get on a boat with their baby, but had to go back on land to fetch some luggage that had been left behind. Meanwhile many other people desperately made their way on board this same boat. They didn´t see the baby, and stepped without caution, piling their luggage on top of the baby.

When the wife came back to the boat she could´t´t find her baby. She desperately removed all the luggage and finally found the baby under so many things, dead from suffocation. At the same time the severely overloaded boat left the shore to cross the river. The wife was horrified, mourning the  child she had just lost. The man did his best to comfort her, and himself.

Suddenly, in the middle of the river, the boat got caught by a stream and capsized.  People tried to hold on to some of their luggage, which was floating, but few managed to stay above the water. Most of the passengers drowned, including the wife of the man. He could´t save her. He was able to swim while holding on to some reeds and managed to get to the shore. Also some of the crew survived.

This man lost his whole family in a couple of hours, when they were trying to find a safe place from the fighting.

When I met this man in Juba, his mind was full of fearful images of what had happened to his wife and child. He had problems sleeping at night, with nightmares and the ever present image of his wife haunting him. I offered him TTT, and he accepted. After a while he said he felt a bit relieved in his body, and his mind felt more sound and reflective. The next day I met him he explained that all the bad memories had been treated, and he was sleeping well.”