“You know, my head was full of thoughts like prejudices and hate when I came to this meeting. I got irritated even when trying to talk to the women sitting outside when they didn´t understand my tribal language. I thought to myself: What kind of meeting is this? Why am I supposed to sit with these people?

But after that tapping exercise my mind got clear. Then I could suddenly listen to the others and even get the message from the film that was shown.” (The film shown was An African Answer – about reconciliation after the post election violence 2008 in the area. Link to trailer). 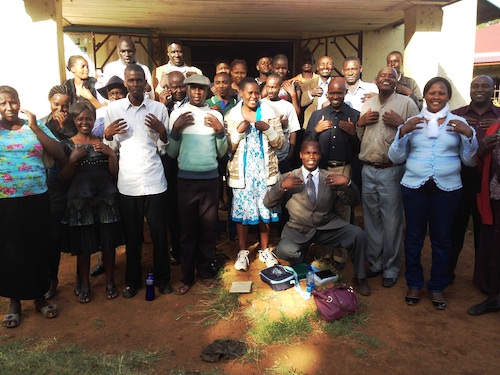 “It was a very strange but comfortable feeling of being relaxed.”

Emmily Korir (in blue and white dress) belongs to the kalenji tribe in western Kenya. During different occasions there have been clashes between kalenjin and the other tribes in the area especially the kikuyus and the luos. The conflicts have grown out of different views on how to share land resources and other conflicting interests and lack of good communication. 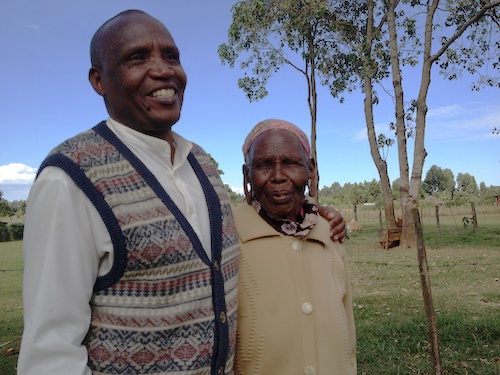 The meeting she is mentioning was organized by Joseph Wainana – as part of a program on reconciliation initiated by USIP and Initiatives of Change. Wainaina (i the picture together with his mother) had invited representatives from  different tribes and counties, youth and elders to discuss and communicate on how to build and sustain peace in the area.

“Thank you for educating us in that activity. I did it with 32 women yesterday, and that were very happy about it. They said they would go home and do it with family and neighbors, she commented. Tomorrow I will do it with single mothers.The school is closed, so with the children I will do it in January. For youth I will do it next week when we have a Youth Forum. Actually I also did it with a passenger who was in the same bus yesterday. Otherwise, thank you so much for your concern. Have a good night.”

One Reply to “Reconciliation in Kenya”